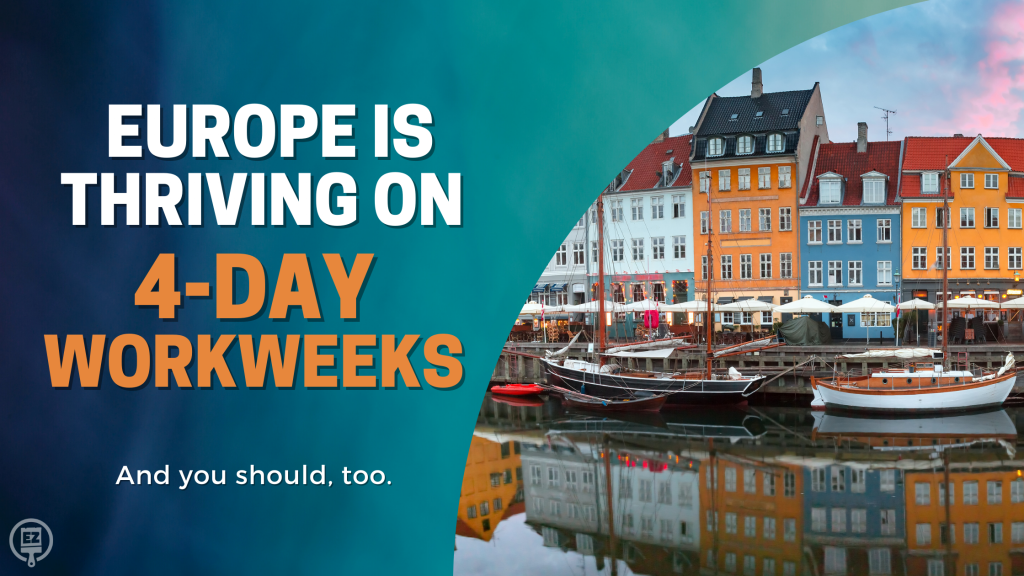 Europe is Thriving on 4-Day Workweeks, and You Should, Too

What if a 3-day weekend was every weekend?

The world’s most productive countries have 2 things in common: 1) They work less hours than the United States, and 2) They are the happiest nations in the world. Americans glamorize the hustle culture, but is that actually resulting in better productivity, or is burning the wick from both ends just burning out the workforce?

Covid-19 has changed everything about our world, and how we work is no exception by a longshot. Love it or hate it, the migration over to remote work, Zoom calls, reduced office hours and the discontinuation of going out for drinks with your colleagues on Tuesday nights have become the “new normal”.

But that’s not all. If you’ve noticed a longer than usual delay for your burger and fries, or waited impatiently in the long line at the store because there’s only one register open…you’re not imagining things. What has been termed as “The Great Resignation” is causing massive turnover across many sectors, especially within the service industry. On top of that, supply chain disruptions and extreme weather of biblical proportions have made our current economic situation a downright mess.

The way we collectively think about work has changed drastically since 2019 (was that really only 3 years ago?).

Employees are burned out, and many have opted to quit rather than returning to work at the office – and for good reason! Despite what HR may say, many workers have found that they’re more productive at home, which makes sense: No one is poking their head around the corner with interruptions and questions, meetings can be listened to in the background while catching up on emails, and all that time saved on the commute means more sleep and free time to engage in doing other things.

Now that we know what we’re missing with the return to the office, employers are having to come up with tempting incentives to maintain their workforce, as well as struggling to attract new talent. One way they’ve responded to this is by offering a 4-day workweek.

Industrial revolution and the evolution of the workweek

Allow me to take you on a brief journey through history. Don’t worry – there won’t be a quiz at the end.

Did you notice that it’s been almost 100 years since the 40-hour workweek was first introduced? The Industrial Revolution brought factories, electricity, and machinery that meant we were no longer restricted to working only during daylight hours on a seasonal basis. Those big machines were expensive to operate, so factory owners kept their factory doors open for longer hours to optimize production and profits.

Today, our computer screens never run out of light and can run 24/7, so does that mean we should be working more, for the sake of “increasing productivity”?

Science says no. In fact, the more hours a person works, the LESS productive they become. It turns out that working for about 30 hours a week sees the highest productivity, proven by our European neighbors across the pond again and again and again.

Productivity does not pace hours worked

As humans, we have amazing abilities to accomplish great things, but we also have limitations – which is why productivity plummets by the 4th hour, and less than 1/3 of our workday is spent on-task.

When an employee can finish their work in just 4 hours, but they’re paid to keep a seat warm for 8 hours because there’s nothing else for them to do, that leaves 4 hours of the day to try and look busy.

The problem lies in judging someone’s productivity (read as: value) according to how many hours they work. If someone works 60 hours a week, we praise their work ethic, putting hussle culture on a pedestal as the ultimate way to prove one’s value. In other words, we have a deeply ingrained cultural belief that we must prove our worthiness as a good worker bee that produces profit for the enterprise we’re a part of.

However, we know from the studies done on productivity that this is a logical fallacy. In actuality, X hours worked DOES NOT equal Y productivity/value production. In fact, we know with certainty that the exact opposite is true, where the more hours that are clocked per day directly correlates to a clear drop in productivity.

If we can actually look at the data and admit that human workers have limitations and produce less value after the 4th hour, what would change in our current work climate?

Life in the 21st century is busier than ever, and it seems like there is never enough time to do all the things. For the first time in history, it’s now the norm for both partners in a familial unit to be working outside the home, but those responsibilities of taking care of the home, kids, and other tasks haven’t disappeared; that growing to-do list is still just as long, but now it has to get done in the short amount of time between getting off work and going to bed, eating away the time to rest and connect with anything outside of our jobs. Anyone who’s had to make a doctor appointment knows that some things simply can’t be done outside typical office hours, meaning they must chip away at PTO (if they’re lucky enough to have any).

What would life be like for you if you had an extra day off every week?

For starters, you could actually get in to see your dentist without taking time off work, and still have enough daylight left to go hiking or read a book that same day.

When companies switch to a 4-day workweek, they see an average 62% drop in absenteeism. Obviously that’s good for those not dipping into their sick days, but less people missing work is good for the company as well. Less sickness, less missed deadlines, and less scrambling to find someone to fill in for a missed shift are better for everyone.

An additional free day would also help close the gender pay gap, as these more flexible working conditions make it possible for caretakers to keep a fulltime job, rather than taking part time work or staying home due to the rigidity of the current 40-hr setup that just isn’t practical (or even possible) for many people, especially families with young children.

For instance, if both parents work outside the home and they have a child in daycare, the average cost is about $340/week. If both parents had one day off throughout the week and they could be at home with their kid, that cost of daycare drops by 40% and saves them a whopping $7,000 a year in childcare expenses, per child.

This all sounds fantastical in theory, but is this possible to implement into real life?

Fortunately, other countries have already taken the gamble of trialing 4-day workweeks so we don’t have to guess with our eyes closed.

Because of huge differences in the amount of paid time off that varies by country (as much as 38 paid days off between national holidays and vacation time!) we’ll go by annual hours worked and look at who the top 10 most productive countries are, according to productivity per person, per hour.

Hmm…looks like the United States didn’t make it in the top 10. The US averages 1767 hours per year, which is 21% more than Luxembourg, yet we didn’t even make it onto the list. Awkward.

Just for fun, let’s look at the happiest countries in the world, and put an asterisk by any countries that also happen to be on the most productive list AND who work less hours annually than the US:

Interesting. With the exception of Finland, the world’s happiest countries are also the most productive, and work just an average of 1428 hours per year. Again, that’s 21% less hours than the US…which equals about 1 less workday per week.

The correlation between happiness and spending less time at work is obvious, and apparently their productivity is positively benefiting as well.

Our world has changed drastically since 1940, with global productivity more than doubled since then. While everything else about how we work today is drastically more efficient, powerful, and constantly evolving, the US is still operating from an antiquated 40-hour workweek that has not been updated in nearly a century.

The 32 Hour Workweek Act has been proposed, which would amend the Fair Labor Standards Act of 1938. The most notable change would be paying employees overtime after 32 hours per week.

Switching to a 4-day workweek, from a logistical standpoint, is complex and there are many things to consider from the perspective of the employer, such as hiring additional staff to maintain current operating hours, whether to cut or maintain current salaries, and finding new ways to calculate how much value an employee is producing by work output rather than the number of hours spent in a chair.

I won’t pretend to have all the answers, but one thing is for certain: We need to rethink our concept of productivity and reevaluate the current work-life balance to something more sustainable than what we’re currently doing.

Unlike the European top-down approach, such as how Spain’s government is experimenting with a 4-day workweek without any pay cuts, the US will probably warm up to the idea if it’s approached bottom-up. This means small businesses adapting to the 4-day workweek and normalizing not working 40 hours, proving that productivity and growth are maintained. Eventually, larger companies will take notice (Microsoft in Japan already did), and we’ll see a widespread shift that will reduce burnout and free up time for life away from our desks.

If your boss laughs at the suggestion of you only working 30 hours but getting paid for 37.5, one solution to consider could be making the jump to becoming your own boss, where you get to set your own hours and get paid what you’re worth.

Not to worry – even if you aren’t sitting on a multimillion dollar idea, there are other options to consider, such as starting a franchise. This takes away a lot of the risk of wondering if a new idea will work, while also allotting you the freedom and flexibility of owning your own business.

If a 3-day weekend every week sounds like something you’d be interested in, consider taking the reins and making it happen by getting more information about owning your own Paint EZ franchise here.

How to Negotiate With: Controllers

How to Negotiate With: Followers